And about time too I think. This is the first male garment I’ve made and I was quite nervous about it. So – Martin has asked me to make him a shirt a few times and I finally felt ready to attempt one.

I spent a LONG time fitting this; making a muslin, altering a muslin, making another muslin. And then panicking when it came to cutting out the actual fabric. Sewing for other people is so much more pressure. 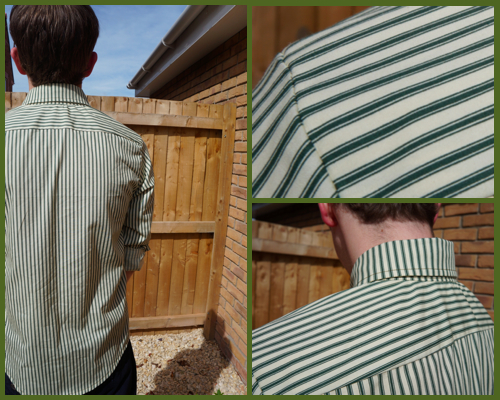 I followed the instructions to the T (pretty much). The pattern is from the Burda Style Vintage Modern Handbook and it was pretty simple to put together. I think there were a few mistakes in the instructions, but with a bit of common sense I managed to work them out.

I did make a few alterations to the fit, but everything else stayed the same. (Better not to go too crazy with alterations on my first male shirt!) Somehow, despite the painstaking efforts of making and adjusting a muslin, the shirt is slightly too narrow across the shoulders. And I have to admit that it looks a little like pyjamas so I’m not sure that it will be worn much. I’m going to chalk this one down as a learning experience. Luckily it has the VERY redeeming feature of being made from the exact fabric as the pillowcases in Grimmauld Place (Harry Potter and the Deathly Hallows Part 1 obv!) And no, I didn’t know that when I bought the fabric, so you can’t judge me TOO harshly, but I happened to be watching the film as I made the shirt, so it was easier to notice.

My favourite part of this project was topstitching around all the edges. It was really therapeutic and made it look so much more professional – in my humble opinion.

Anyway, enough of the chit chat. I hope you all like my first attempt at kind of tailoring. Any tips on making shirts not look like pyjama tops?

I'd love to hear what you think... Cancel reply

Email me! I love hearing from you all

What are you looking for?

Some of your favourites

The story of Baby Bean and a lot of opinion.

sewing pieces to wear and admire